LEAH Marchant has worked in animal welfare for most of her life and saw a need for lost animals in Scone to be better cared for, so she has established Scone Lost Dogs.

After hours the local pound is closed and the vets are only there for emergencies, so Leah has invested in a microchip scanner to help reunite animals to their owners quicker. 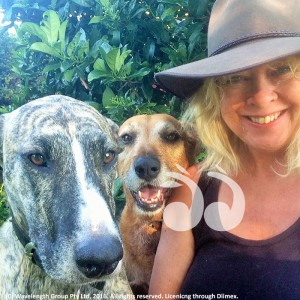 Leah Marchant with two of her own dogs.

Ms Marchant has also built a dog run so that she can temporarily hold a dog or cat for 24 to 72 hours until the owner can be found or the pound reopens.

She also regularly transports animals to rescues throughout the state as part of the Australian Country Poundies network which rehomes animals from regional areas and is proud that since she has been working with the local animal pound no dogs have been euthanised and all have been rehomed.

“I love what I do, it gives me a sense of joy just knowing I can make a difference and I’ve always had rescues and now I just have the opportunity to make it bigger and better and social media helps with that too,” said Ms Marchant.

“I’d worked at the pound on and off for five years and with social media growing I saw people posting on the community page and I had a few people ask about a specific page for lost dogs and cats,” she said.

“I’ve been working in that environment with animals for a long time, when I was a Scout leader I used to take the Scouts to the animal welfare league of a Saturday to exercise and play with the dogs and cats.

“Lots of people in town are kind enough to get the dog or post on the page to help find the owner, but they often can’t hold the dog for very long to keep it safe because they may have a dog of their own, or the dog itself can start to get stressed and that’s where I can come in and scan the dog to help find the owner.

“I can hold the dog temporarily if we need to, but we want to track down the owner as soon as we can and often after hours when the pound is closed and the vets are only there for emergencies people can’t track them down.

“I send the microchip number to the Scanning Angels and they have access to the owner’s information and can track them down,” she said.

“Recently we had a dog whose owner was deceased, but they were able to track down their relatives and the dog is now safe and well,” she said.

Leah enjoys being part of the Australian Country Pounds network because dogs in regional areas are less likely to be rehomed.

“The volunteers pledge money for transport, medical services and the whole reason Australian Country Poundies is there is to give rural and regional areas a chance at saving their dogs.

“When Upper Hunter Shire posts dogs onto their site I then share it on Scone Lost Dogs and Australian  Country Poundies share it and I offer transport to get the dogs safely to rescue, I’ve not seen one euthanised since we have worked on it together.”

Leah said she wants to get word out into the community that she is there to help and when people find a lost dog to go to their Facebook page or phone her.

She is also hoping to get a donation bin at a local shop where people can donate dog and cat food to support the animals cared for by Scone Lost Dogs.

Contact Scone Lost Dogs: on Facebook or phone Leah on 0429 488 042. scone.com.au has provided a free webpage on our site to promote the volunteer service and ensure people who are not on Facebook can find their information.