RACHAEL Abbott, a stockperson who worked at the Caroona Feedlot in 2014, is the lead claimant in an action against the makers of the Hendra vaccine, Zoetis Australia and the law firm representing Ms Abbott predict there may be 500 or 800 claimants who will take part in the class action which has been lodged in the Federal court.

Ms Abbott was told by her employer that her horses had to be vaccinated for Hendra or her employment would be terminated. Ms Abbott had two horses working at the feedlot, Primetime and Ervines Jive, which were in good health. On August 20, 2014, both horses were given the second Hendra vaccination and the following day it was noted neither horse had eaten the previous nights’ meal and both horses had runny stools. Primetime suffered a localised Alopecia lump at the site of the injection and suffered pain, pale mucous membranes and stiffness and these symptoms persisted into September. Ervines Jive also had an injection site reaction, Oedema, pain and Pyrexia and became depressed and touch sensitive after the injection. The horse had swelling in her joints and over kidneys, pale or white gums, rapid breathing, weight loss, disorientation and was stiff in her movements. As a result of this, Ervines Jive required four months of veterinary care. Ms Abbott refused to give her horses the third injection and her employment was terminated.

In the statement of claim lodged in March by LHD Lawyers alleges the makers of the Equivac HeV vaccine (Hendra vaccine) breached the regulations granted under the ‘minor use permit’ and misled horse owners and veterinarians about the side effects of the drug. 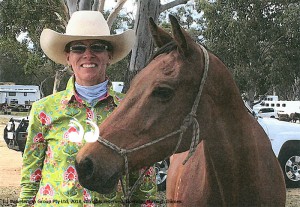 Rachael Abbott with one of her horses.

John Rowe, the barrister representing Ms Abbott, said the vaccine was not thoroughly tested prior to broad use.

“The trial was only carried out on nine horses and the control for those horses were of a different species including ferrets and guinea pigs and a cat, the actual trials we say were flawed in the first place,” said Mr Rowe.

“There is a lot of criticism about the way they carried out the trial in the first place, secondly whether or not results of those trials could have indicated any side effects, we say that because the horses were euthanised; those given the vaccine, within nine days, before often the side effects would manifest,” he said.

“The crux of our case is a failure to warn of the side effects of which the defendant knew or ought to have known and the ‘ought to have’ comes back to the trials,” John Rowe said.

Dr Ben Poole, president of Equine Veterinarians Australia said his practice in Queensland has administered more than 8,000 injections of the Equivac HeV vaccine and has not witnessed any significant side effects.

“The vaccine has been registered by the APVMA (Australian Pesticides and Veterinary Medicines Authority) so they don’t register anything in this country unless it’s been proven to be safe and effective,” said Dr Poole.

“Secondly the veterinary association would never recommend a vaccine which was harmful to horses, so it’s just not something we would do,” he said

“We see a very low rate of reactions, they are usually pain and swelling near the site of injection…as for deaths the APVMA has reported that there has been seven possible deaths as a result of the Hendra vaccine…and there just wasn’t enough evidence either way to say whether the horse died as a result of the vaccine, or whether it died of something else, it just unfortunately coincided with the vaccine being administered,” he said.

“It tends to be the case that there is another disease going on and the vaccine gets blamed for whatever disease process was,” he said.

“We had a Parliamentary enquiry in 2016 in Queensland that looked into the Hendra virus vaccine and its use by vets in Queensland and so there was ample opportunities to bring forward evidence that the vaccine was harmful and certainly people did state that the vaccine had harmed their horse, but there was no evidence actually produced that proved that, it is very much an anti-vac sort of area,” he said.

“Certainly from my own personal experience with the vaccine and we are in Hendra country in south-east Queensland and our practice has administered about 8,000 doses of the vaccine and we haven’t seen any sudden deaths or weird disease processes or anything untoward, other than the occasional horse gets a sore neck or a little bit dull or spike a fever for a few days and we treat those with some anti-inflammatories and they get better,” said Dr Ben Poole.

However, John Rowe argues anecdotal evidence is no substitute for thorough clinical trials of the vaccine.

“The reality is he (Dr Ben Poole) is relying on reports being forwarded by vets to Zoetis and recording them and what we are seeing is that those reports have either not been made or they have not been acted on and what we hear is the amount of reactions to the vaccine are far greater than what the veterinarians particularly the veterinarian associations claim and that will all be a matter of evidence and the evidence we are finding is quite compelling,” said Mr Rowe.

Dr Poole believes the vaccine is one of the safest on the market.

“It is a really good vaccine it is a soluble g-extract of the Hendra virus, it is a very clever vaccine and we were all calling for it in 2011 when there was a large number of Hendra cases in Queensland and Northern New South Wales and then we got one and for some reason people are reluctant to use it,” said Dr Poole.

However, Mr Rowe said they are seeing reactions after the second injection.

“Quite often the reaction is when they have the second injection; they just don’t know how long the first injection lasts, we have evidence it lasts over 12 months, but they are saying have the second in six months and that just seems to be nonsense,” he said.

“The vaccine was promoted under a minor use permit in a way that was not permitted under the AGVET code…the purpose of the minor use permit was to allow the manufacturer to test it on horses showing Hendra and instead it was used as a vaccine…and then they got a lot of reactions, which if they’d exercised pharmacological vigilance properly they would have not dealt with those reactions in the way in which they did,” John Rowe said.

Dr Ben Poole said that the vaccine can prevent horses and humans from dying and is therefore well supported for use.

“It’s a bit of a no brainer really we should be vaccinating to prevent not only a horse dying but any person that comes into contact with that sick horse potentially dying as well; so we strongly recommend vaccination, it is the most effective method of preventing Hendra disease,” Dr Poole said.

The impact of Hendra and the need for the widespread use of the vaccine is challenged in the action filed with the federal government.

“In fact there is no incidence, so far as we are aware, of it being transmitted from horse to horse….so the reality is if you had a horse come to Scone and it had Hendra, first of all it’s likely to be diagnosed with it because it will be unwell in a large number of different ways including neurological so it would be readily identified, but secondly the chances of that horse transmitting Hendra to another horse is almost zero and the chance of spreading it to a human will only occur if the horse is dead or dying and omitting fluid that the human is having close contact with,” John Rowe said.

The one point both sides agree on is the source of the Hendra virus is from specific breeds of flying fox.

However, Mr Rowe questions the need to inoculate horses not considered to in at risk areas.

Horse owners who believe their horse may have been adversely affected by the vaccine may be eligible to join the class action, will not be liable for any costs by nominating that they may have a claim and can visit the LHD Lawyers website for more information: Hendra Virus Class Action.

« Damning Submissions Against Rate Rise
Winch Back In Operation »