Just In > Another $2.5 Million Needed At Airport

Another $2.5 Million Needed At Airport

Filed in Just In by Elizabeth Flaherty October 29, 2019

THE Upper Hunter Shire Council has consistently quoted the cost for the Scone airport project as $23.5 million, however there is at least another $2.5 million needed for hangar construction, which was not included in the overall cost, bringing the real cost to $26 million. 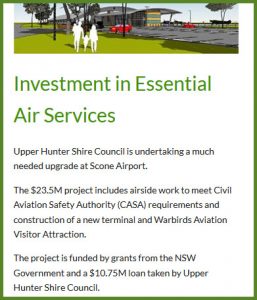 Another $2.5million is needed to build six hangers at year 5 of Council’s airport plan.

The Council drawings for the airport, only show a total of seven hangers.

Geoff Pinfold who currently owns hangars at the airport, said the costs of building the hangars and lease fees seemed realistic, but questioned if the demand for hangers in Scone was realistic.

“Council have set their hanger fees at $35 per square metre, which I think is a fair market price,” said Mr Pinfold.

“But I seriously doubt whether there will be sufficient actual demand from aircraft owners to lease even a few of the ten hangars.

The concept drawings of the Council’s airport project only show a total of seven, very small hangars, each of which appear only have room for one light aeroplane.

But each of the 10 hangars described in Council’s project report is large enough to hold 10 light aircraft.

It is not at all clear just where on the airport there will be sufficient uncommitted land to allow the 10 quite large hangar buildings to be built.

“I question how realistic it is to assume that there would be sufficient demand from aircraft owners to fill these hangars, which will be large enough to house 100 light aircraft<’ said Mr Penfold.

“If they aren’t leased, Council will come up very much short of its predicted income,” he said.

“I built a hangar that houses 10 light aircraft, which is usually full and as spots are vacated, they seem to be taken up fairly soon afterwards.

“But by no means do I have a waiting list of people wanting to lease a hangar” he said.

“I’m also greatly concerned that Council’s report says the cost of the 6 hangars it will build in year five, will be $2.5 million.

“This very large amount has not been included in the total project cost of $23.5 million,” he said.

“That cost then will actually increase to $26 million and Council has yet to say where it will get this extra $2.5 million from,” Geoff Pinfold said.