Just In > Better – But Can’t Say Wetter Weather Than Average

Filed in Just In by Elizabeth Flaherty February 12, 2020

A temperature change of just a couple of degrees in the Indian Ocean can indicate if we will get more rain in the Upper Hunter.

Since the 1960’s climatologists have monitored the temperature of the Indian Ocean to trace El Nino and La Nina weather patters and with the Indian Ocean Dipole (IOD) and the Southern Annular Mode (SAM) slipping back into neutral, the Bureau of Meteorology is predicting greater chance of rain than this time last year, although not wetter than average conditions at this stage.

We spoke to Felicity Gamble, climatologist with the Bureau of Meteorology to explain what the current climate models are predicting:

Last year we saw one of the strongest ever Indian Ocean Dipoles, around May we saw some atmospheric changes, but it wasn’t until the end of June where we saw our index go above our typical threshold for a positive IOD and it was one of the longest lasting events as well, it went right up to the end of December.

Normally we see an IOD start to wane around the end of November as the monsoon trough shifts into the southern hemisphere and that weakens the whole atmospheric set up for the IOD and it goes back into a neutral phase, but this year the monsoonal trough was very late moving into the southern hemisphere so the Indian southern monsoon was actually much wetter and prolonged was usually.

Everything was slightly delayed so it also meant the Indian Ocean Dipole stuck around for a lot longer and obviously we saw that in December with a really dry month and a really hot month as well and obviously that flowed on to bushfires and heatwaves.

The definition of drought breaking is really hard, it depends on what period you’re looking over for calculating the rainfall deficiencies and then how much rain is required to eliminate those, so it is hard to define that, but certainly what we can say at the moment, is that the drivers have gone back into a neutral phase, but a phase which means it is more conducive to rainfall events.

When the positive IOD went back to neutral at the end of December, we also had another driver the Southern Annular Mode (SAM) in October to December, SAM was also having a very strong drying impact on much of NSW. 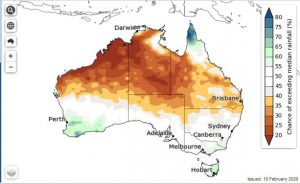 Chance of mean rainfall during February 15 – 21.

We’ve obviously had the odd hot day here and there, but that is fairly typical of summer’s these days, but we are in a period which is much more conducive to rainfall

The monsoonal rain was late to set in up north, but now that it has, we are seeing some of that tropical moisture being pulled down into New South Wales and we saw that over the weekend with big rainfall events down the coast.

Neutral – No Strong Shift Yet

Currently forecasting neutral conditions to continue, but we have an autumn predictability barrier, which is when events do kick in like an El Nino, or when events finish, so models have difficulty forecasting over the autumn months.

Our model and most models around the world, their outlooks for El Nino, La Nina are generally in agreement that conditions will stay roughly close to neutral, some are showing a slight tendency towards El Nino, but not going over any thresholds.

Our models do take into account global warming and the effects it has on temperatures and rainfall and those trends are based on human activities, so it’s definitely taken into consider in it with our model outlooks.

There is very good evidence for warming trends, we’ve seen Australia’s climate warm by 1.4 degrees since 1910 and in terms of rainfall, we have seen much of southern Australia observe a 10 to 15 percent reduction in cool season rainfalls, through April – October, in recent decades.

So global warming does not mean you no longer get cold weather ever again, you still get those cold snaps and we’ll still see snow in the ranges over winter, but it’s looking at the regional averages over time and seeing that warming trend is quite clear.

Ocean temperatures are an area of ongoing research, how warming of the oceans is likely to impact our climate patterns and if we a re likely to see for example, more El Nino events, or more positive IOD events than normal.

A lot of our models that project out towards the end of this century are certainly indicating there may be more positive Indian Ocean Dipole events such as we’ve just seen, due to global warming, so when I said Australia’s climate has warmed by about 1.4 degrees, that’s the surface temperature over Australia, but the oceans are warming slightly faster than the land mass globally and that will play a role in changing climate patterns.

But it’s not always clear how that is going to impact and it will probably have very different impacts around the world, because the warming isn’t linear, it’s not the same all around, in all of the oceans.

We do see some oceans which are warming more than others and how that is likely to play out in climate patterns or future changes to El Nino frequency or intensity is still an area of ongoing research.

There are certainly indications that the positive IOD may become more frequent.