NSW Police have just published the following statement in relation to the suspicious death of a seven month old baby from Aberdeen, which died in Muswellbrook hospital on Sunday:

A man wanted on five outstanding warrants has been arrested by police following a vehicle stop near Muswellbrook. 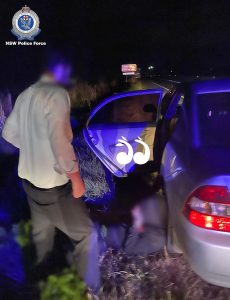 Arrest made on Wednesday night in relation to the suspicious death of a baby from Aberdeen on Sunday afternoon.

Just after 6.30pm, a 34-year-old man was arrested following a vehicle stop on the New England Highway at Muswellbrook.

Upon his release from hospital, he was conveyed back to Muswellbrook Police Station.

The man has been charged with five outstanding warrants relating to traffic, property, judicial and revocation of parole offences.

The Muswellbrook man was refused bail to appear at Newcastle Local Court tomorrow (Friday 22 May 2020).
Inquiries are continuing.

The police photo of the arrest, shows the arrest was made on the New England Highway in Muswellbrook, southbound, approximately 400 metres from Hunter Belle Cheese Factory.