Steve McDonald has been general manager for two years and his resignation follows the departure of Wayne Bedggood as Mayor last month (Read: Mayor Bedggood Resigns). 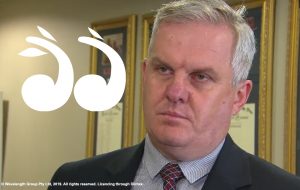 General Manager, Steve McDonald being interviewed by A Current Affair earlier this month on the Merriwa to Willow Tree Road blunder.

In the statement Mr McDonald said he wished Council staff, Councillors and the community “all the best for the future.”

“Steve joined the council in March 2018 and, in that time, there have been an enormous number of large scale projects started, underway or completed,” he said.

“On behalf of council I thank him for his service and dedication to a challenging role.

“This council operates with a relatively low rates base but provides a wide range of services and businesses to a very large geographic area.

“Personally I also thank Steve for his support and guidance to the councillors to ensure decisions are made in the best interests of ratepayers,” he said.

“We hope Steve and his family enjoy some well-earned, quality time together and I ask that his privacy be respected,” Mayor Collison said.

At this evening’s Council meeting a matter was discussed in closed Council, which was described as a personnel matter and no details of the discussion were made publicly available.