AUSTRALIAN Pacific Coal, the owners of the underground Dartbrook coal mine, located approximately four kilometres west of Aberdeen, are considering challenging a decision made by the Independent Planning Commission not to grant a licence extension for the mine.

In August, the Independent Planning Commission approved modifications to restart the mine using bord-and-pillar methods instead of longwall mining and make changes to their coal delivery and handling, but refused to extend the mining licence for five years.

The Company has until November 8 to lodge an appeal with the NSW Land and Environment Court.

Overview of the Mine: 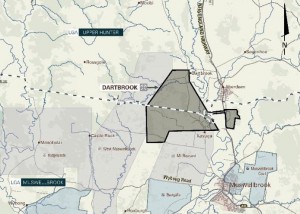 Proximity of other open cut operations to Dartbrook mine, with dotted line showing Shire boarder. Map from Australian Pacific Coal.