NEARLY 2,000 deer have been culled from the Upper Hunter, thanks to the latest intensive aerial program by the Hunter Local Land Services Biosecurity team.

The program was in response to community concerns of the feral species on drought stricken farmland and moving further into townships.

Mark Wylie, a Murrurundi landowner said the program has had outstanding results on his property.

“Before the program it was nothing to go out at night and see mobs of 150 to 200 deer on my pasture, but the culling has dramatically reduced the numbers,” said Mr Wylie.

“It’s astonishing to see the impact already, the control programs have made a huge difference for us and now it’s important to keep the pressure up so the deer don’t rebuild in our area,” he said.

“We are also putting up an exclusion fence, and we just received a few showers of rain so it’s exciting to see some oats finally coming through, and not getting decimated by deer,” Mark Wylie said.

“Deer are very destructive, eating pastures and crops, damaging native habitats and now with the drought they are desperately in search of food and water,” said Mr Booth.

“This year has been disastrous for many local producers, and reducing the number of feral species competing for limited feed and water supplies is crucial,” he said.

“We know pest animals are one of the biggest concerns for local landholders regardless of the season, but the drought has really exacerbated these issues, and by undertaking targeted strategic programs in known hotspots we are getting some really good results,” Luke Booth said.

Hunter Local Land Services is now working on plans for follow up control programs in the district. 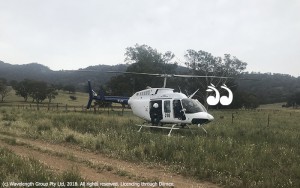 « Upper Hunter Cricket: Round 8 Results
Have You Seen This Man »