Just In > Emergency Plans To Save Manning River Turtle

Filed in Just In by Elizabeth Flaherty January 20, 2020

AUSSIE Ark has relocated three Manning River turtles from their home in the Barrington Tops to their partners at the Australia Reptile Park, in an effort to save the species from extinction.

The female, male and juvenile were among more than 30 turtles rescued from the Manning River catchment in the Barrington, when a planned field survey turned into an emergency intervention when many animals found dead due to the drought and bush fires.

The turtle species is estimated to be more than 55 million years old, possibly the oldest turtle species in Australia, which exists solely in the Manning River catchment. 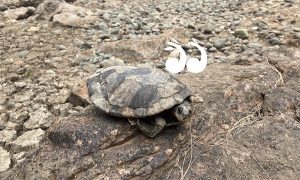 A Manning Rvier turtle which perished in the drought. Photo: Aussie Ark.

Tim Faulkner, president of Aussie Ark, said while they took steps to care for the species two years ago, the recent catastrophic events have nearly wiped out remaining populations restricted to the deepest holes of the drying Manning River.

“We took notice two years ago that this species needed help, and with community support built a specialised facility, to stop the extinction of this species,” he said.

“Freshwater turtles are natures vacuums, they are critical to our freshwater ecosystems, cleaning up river systems, keeping aquatic vegetation in balance, and maintaining the stunning waterways Australia is known for,” he said.

“Now catastrophic events have nearly decimated their remaining populations. This insurance population is a promise for the future and wonderful that we were ready to step in a help,” he said.

The Manning River turtle facility at the Australian Reptile Park has been built with the support of the Turtle Conservancy, Steber International, the Happy Wombat, Aus Eco solutions, Manning River Steel and private contributors.

Aussie Ark has also partnered with the Global Wildlife Conservation and Earth Alliance, which has pledged $3 million to help rebuild, rewild and recover Australian wildlife.

« Rain Hit And Miss With Fires
Rainfall in Last 24 Hours »