Just In > Hatchlings of Hope

TEN tiny turtles have hatched at the Aussie Ark, hopefully the first of hundreds that will make their way back into our river system each year to ensure the Manning River turtles survive as a species.

The eggs were collected along with a few remaining turtles who had survived the devastating drought and bushfires.

Tim Faulker president of the Aussie Ark, said when they planned for a breeding program three years ago they couldn’t have anticipated how urgently needed it would become. 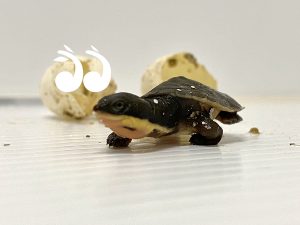 “Because Manning River turtles were endangered before the fires, we started planning for the conservation breeding program three years ago and happened to have the facilities ready for these emergency rescue efforts when the fires began,” said Mr Faulkner.

“As amazing as this is, I’ll consider the project a major success when we’re returning 200-300 juveniles back to the river system each year, but this is a truly joyful way to kick off those efforts after so much heartache,”  he said.

The baby turtles will be monitored closely, eventually moved into a nursery of specially designed tanks for four months before graduating to small ponds and being released back into the wild in the exact place their eggs were found, fitted with radio transmitters to monitor their progress.

Another 20 eggs are due to hatch in early April and staff will be collecting more eggs and adult specimens in the coming weeks and months.

Rescuing the remaining eggs in the wild from predation of foxes and the trampling of roaming cattle is the best chance the species has to survive.

The Aussie Ark has also begun work to save another two species of threatened turtles.

To support the turtles you can donate to the crowdfunding campaign.