Just In > Tom and Rosemary Hope Community Can Help

Filed in Just In by Elizabeth Flaherty January 29, 2020

WELL known and much-loved Scone couple Tom Lavelle aged 83 and Rosemary Lavelle aged 84 are back in their home in Guernsey Street and yesterday sat down to talk to scone.com.au in the hope of people helping them find who assaulted them on Sunday night.

The community of Scone has been outraged by the attack on the elderly couple and Tom and Rosemary said they have been comforted by the kindness of the community. 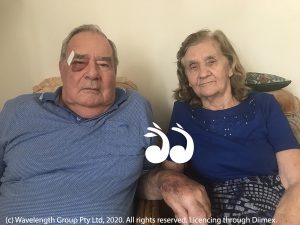 Tom and Rosie Lavelle, hope the community can help find who assaulted them on Sunday night.

“I just hope they catch them, not so much as revenge, because I’m not that sort of person, but just to get them out of the road and take them off the street, that’s the main thing.

“You just don’t need those sort of people around.

“Any information at all would be most welcome and CrimeStoppers are the best to call,” he said.

Tom and Rosemary Lavelle have lived in Scone since 1964, Tom’s family can be traced back seven generations in Scone and together with Rosie they raised nine children of their own and now love their 21 grandchildren returning to Scone for visits.

They had just returned home to Scone, after staying with family on the coast while Tom recovered from surgery on his leg, explained Tom.

“We sat up and watched the ABC on Australia Day and we had a bottle of red and it was about 10 when we remembered we had to put out the bins, so we put them out the front and somebody was in the centre of the road…and said something about ‘you people!’ and I just said, ‘what’s your problem?’ and the next thing I know I was involved with all me garbage bins,” said Tom.

“We came straight in when we finally managed to get up and got onto triple 0 and called the police,” he said.

“The ambos were the first to get here and they were brilliant,” Tom said.

Tom and Rosemary sustained a range of injuries which ambulance treated on scene, before Tom was taken to Maitland hospital for CT scan. 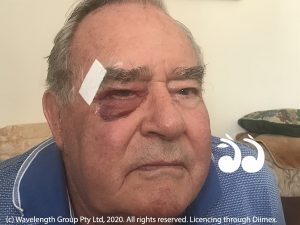 Tom needed five stitches above his eye and even though he was a boxer and footballer player, it was his first black eye.

“I’ve had five stitches near my eye, a crack on the top of my head, bruising up and down my arms, on my back, but this is the worst one (pointing to his leg), I’d say it must have been from hitting the gutter and I had a big flap of skin rolled right back,” said Tom.

“Luckily, Rosie skinned her knees a bit, but I don’t think they attacked her, I think she just got involved with me, but she went down and she was down on her knees,” he said.

Tom, who used to be a boxer and played rugby for Scone, said he was surprised by the force of the attack and disappointed he couldn’t fight back.

“I’m 100 kilos, so to be able to hurl me onto the ground, they are either super-duper strong, or they’re high as a kite on something, because it’s not normal,” said Tom.

“They tackled me with force and it’s the first time I’ve ever had a busted eye,” he said.

“But from the damage I got it might not have been a woman, unless they were as high as a kite.

“I was very surprised and disgusted I couldn’t do anything to stop it.

“Surprised that at that time of night, in front of your own home in a quiet little country town that I thought it was to get attacked like that, it was a big surprise it really was,” he said. 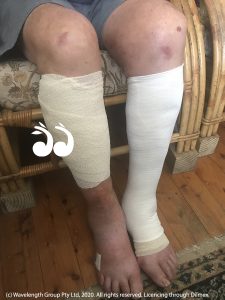 Tom had just recovered from surgery on his left leg and sustained injuries on both legs during the assault.

“It’s scary, I’m weak as a kitten with polymyalgia rheumatica…and my skins like tissue paper, so that’s why I ripped,” said Tom.

Rosemary added she was glad he couldn’t fight back as it could have become worse.

“The thing that scared the hell out of me and Mark (his son), I didn’t know at the time, but Mark found a broken glass out on the driveway and it wasn’t a beer bottle…it a beer glass or a spirits glass…like from a pub…the thing that worried me was glassing,” he said.

Their eldest daughter, Jo Vickery, said the family appeal to everyone to help find who attached their parents.

“Just anybody who has seen anything, if they’ve seen somebody during the night acting suspiciously or out on the streets in Guernsey street to come forward,” said Jo.

“Any small information, even if they don’t think it’s important, it might be,” she said.

“Primarily we’re concerned about their welfare and the welfare of other people that are living in the street or in the town.

“And that’s the whole idea that they can stay in their own home for as long as possible, they’ve been in this house for 50 years and it’s just terribly sad at this stage of their life,” she said.

Police are continuing to investigate and urge anyone with any information, dashcam footage or CCTV from the area to contact Muswellbrook Police Station on 02 6542 6999 or Crime Stoppers on 1800 333 000.

Tom and Rosie sustained extensive bruisng from the assault. 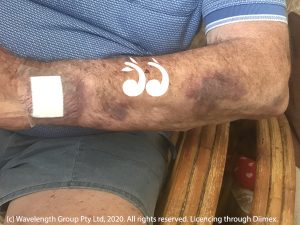 Tom Lavelle had many bruises on his legs and arms and on his back.