LETTER: No Confidence in Council Compliance

I first wrote to UHSC General Manager, Steve McDonald 10 weeks ago, concerned that the Council was incorrectly recording resolutions from meetings, thereby keeping secret from you, information you would expect and have a right to know.

In disgust and frustration, I presented directly to the full Council in the Public Participation portion of the last Council meeting, November 25.

The treatment I received from the Mayor and some Councillors during both my presentations was bad enough, however, the treatment from the Mayor to Councillor Abbott from my perspective was the worst display of chairmanship I have seen in 43 years of attending Council meetings. I urge members of the public to listen to the audio recording and judge for yourself. (Read: Airport Motion: Hear the Meeting for Yourself)

Very interestingly, immediately following the Council Meeting, General Manager Steve McDonald published in the Scone Advocate and posted on Social Media an “Open Letter”, denying any hint of secrecy, remonstrating that “you can be confident” that Council is fully compliant, through “correct” procedures and processes, because Council is highly regulated.

“We seek, welcome and are appreciative of community involvement,” wrote Mr. McDonald.

Sadly, nothing could be further from the truth, from my experience. Consider 10 weeks without a response on such an important issue as a Council I believe is acting secretly, keeping information hidden from you that you are entitled to know. I certainly didn’t experience welcome and definitely no appreciation.

It has always been my concern that UHSC continues to breach Local Government Regulations.

In fact, the Office of Local Government (2013 publication, pp10/11) states that the wording used by UHSC in recording of Council meeting resolutions “DOES NOT MEET THE REQUISITE STANDARDS OF ACCOUNTABILITY EXPECTED OF COUNCIL DECISION MAKING”, supporting my contentions.

There were 18 more non-compliant resolutions recorded at the last Council Meeting, in the direct face of my presentation.

I would have preferred this matter be dealt with by direct correspondence, however given zero response and the general Manager’s “Open Letter”, I have no choice to respond accordingly with the letter I received from Mr. Tim Hurst, Deputy Secretary, Local Government, Planning and Policy last Friday, November 28. 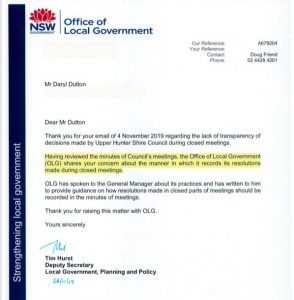 Letter from the Office of Local Government.

Those responsible for this MALADMINISTRATION must be held accountable, particularly given the remonstration that “you should be confident” Council is correctly following rules and regulations. Clearly this is NOT the case.

This is a quote from the 18/19 UHSC AUDIT REPORT, by the Auditor- General, adopted by Council at its last meeting

“My Audit procedures identified the following instance of non-compliance with legislative requirements….Council did not  comply with section 409(3) of the Local Government Act 1993, whereby restricted funds were used for a purpose different to what they are collected for. Council has notified the Minister…”.

Those responsible for this MISAPPROPRIATION must be held accountable, CLEARLY COUNCIL IS NOT FOLLOWING RULES, REGULATIONS OR THE LAW.

The amount of mis-used funds was $380,000, not an insignificant amount, was used from a restricted fund (like a trust fund) for another purpose (Saleyards Project), without the necessary consent from the Minister for Local Government. WHO IS ACCOUNTABLE? (Read: Council Broke Law with $380,000 Misappropriation.)

At the October Council meeting, a motion not to proceed with a secret “Strategic Asset” was LOST, which means the Council, unless it resolves again not to proceed, will continue with the secret purchase of what I believe is the Campbell Corner Building in Kelly St., Scone. (Read: What Has Council Confidentially Purchased? and Letter: Council Culture of Secrecy Confirmed.)

Council has breached the Code of Meeting Practice, in my view, by NOT FULLY DISCLOSING the details of the resolution, which, according to Local Government Regulations “DOES NOT MEET THE REQUISITE STANDARDS OF ACCOUNTABILITY EXPECTED OF COUNCIL DECISION MAKING”.

Furthermore, if the Council has purchased a CAPITAL ASSET, such as the Campbell Corner Building, for an amount exceeding $1.1 million (10% rates revenue), Council will have ALSO breached mandatory Local Government requirements regarding Capital Expenditure, which states that all NSW Councils MUST undertake community consultation and engagement processes PRIOR TO COMMITTING to any Capital Expenditure exceeding the threshold figure of $1.1 million for UHSC.

I believe Council remains secret, but surely would not have committed yet another breach of regulations, because there has certainly been NO CONSULTATION on the merits or demerits of your Council purchasing with your money, a commercial premises in Kelly Street at this, extreme drought, or at any other time.

I have NO CONFIDENCE in Council Compliance, evidence supports my view, not only should there be an external inquiry into the Airport Debacle, a much broader inquiry into UHSC is essential if community confidence is ever to be restored.

Daryl Dutton is a resident and ratepayer of Scone, he is also a former General Manager of the Upper Hunter Shire Council.