Letts: Racing Legend in Town with the Cup

The Lexus Melbourne Cup tour this year has 39 destinations, through six countries before arriving at Flemington on the first Tuesday in November.

Watch video of John below.

John has been on tour with the Cup for many years and this morning at Godolphin shared some anecdotes about his travels and the famous Cup.

“We were at Wangaratta hospital and there was a young girl had had a baby that day and the little fella was only a day old,” said John.

“I put the Melbourne Cup up and I think she was the only person in the world who didn’t know what it was,” he said.

“They brought the little baby in and Debbie was sitting there, we had the Melbourne Cup between her and the little fella and as we were going to take the photo he put his hand across and held the Cup and I said to the photographer ‘get that!'” he said.

“I asked her what the name of the little fella was so we could use it in the paper tomorrow and do you know what his name was?” asked John.

“His name was Archer and the first two Melbourne Cups were won by a horse called Archer and I said ‘someone has told you to tell me that!’, but she said, ‘no that’s his name’,” said John. 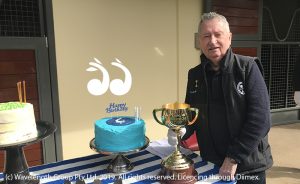 John Letts with the Lexus Melbourne Cup and some birthday cake for the horses at Godolphin.

While John has ridden many horses and two Melbourne Cup winners, as ambassador for the Cup he has had to ride a range of species.

“We’ve ridden camels with it and donkeys and I’ve even ridden a Brahman Bull once,” said John.

“There was a Brahman Bull called Chainsaw and I was up at a place in Queensland and they said ‘you’re riding one of Chainsaw’s progeny and his name is Jigsaw’ and I said, ‘no I’m not!'” laughed John.

“They said, ‘just hold the Cup like that’ and I said, ‘if he’s like his father the Cup won’t stay there very long!'”

“They brought out Jigsaw, he had a cowboy hat on, a saddle and a bridle and he was the quietest Brahman I’ve ever seen,” he said.

“I did get on him, but I made a little kid get on before me,” laughed John.

John talked about the feeling of racing in a Melbourne Cup and how a win changes the life of the owner, the jockey, the breeder, the trainer and the strapper forever, but said just having a horse in the Cup is magic.

“Recently I was on a plane to Melbourne next to a young guy who was going to the Cup who had a runner,” said John.

“He said, ‘I’m going to be in the mounting yard on Melbourne Cup day, because my horse is running and that’s what I’m looking forward to’,” he said.

“He was part of a syndicate and reckoned he owned one hair on its tail,” laughed John.

“But the feeling was, ‘I’m going to be in that yard on Melbourne Cup day’ and as I’ve experienced over the 21 years doing interviews, when you are standing in the mounting yard when they play the bugle to say the horses are ready to go on the track – the hair really does stand up on the back of your neck and I know how those owners feel, even if you run last it doesn’t matter, you’ve had a horse in the Melbourne Cup,” said John.

John encouraged everyone to see and hold the Cup and said they could then watch the race and “when the Cup is presented to the owner, you’ll be able to say ‘well I held it before you’!”