Filed in Just In by Elizabeth Flaherty January 8, 2020

TIM Faulkner, president of Aussie Ark is in the Barrington working to help native species which are being pushed to the brink by drought, fires and feral pets preying on them when they are most vulnerable.

“We’re not at imminent risk here, we’re in the north west top corner and normally the fires burn to the easst, so we are in a natural location with some protection in an ancient area that has the Antarctic beech and ancient swamps which are difficult to burn and the threat of a canopy fire would be hard to get to us,” explained Tim.

“The fires at the moment here have burnt through 12,000 hectares between them and they will not be going out any time soon, but the drought is having a huge impact on the native wildlife,” he said.

“Moonan Brook, Stewarts Brook those rivers stopped running months ago, we’ve been rescuing platypus, we rescued nine, but two were dead and rescued 100 hunter river turtles from muddy holes and moved them to deeper water, but now that deeper water is running out,” he said. 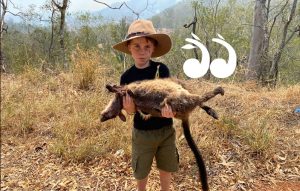 MAtty Faulkner, Tim’s son, witnessing the cost the drought is having on the brush-tailed wallaby in the Barrington. Photo: Aussie Ark.

“On the other side the Gloucester, Manning and Barnard have stopped flowing for the first time in recorded history,” he said.

“We started working with the Manning Rvier Turtles just three years ago and now we are facing a holistic extinction event, that’s drought!

“Even the turtles which can bury themselves in the mud are still dying from the heat in the mud,” he said.

“Even when animals survive that, because their habitat is being destroyed by drought and fire it becomes like a golf course and they have nowhere to shelter and you can imagine what the predators are doing with that.

“We found two dead brush-tails this week, one that was hit on the road and another that was a young male that looks like an older male has kicked the hell out of it, because when there is a lack of food and water and habitat they go searching and when there are higher densities of the wallabies they compete with each other, so this young wallaby would be like a teenager which was outcast and that’s very sad,” he said.

What can be done

“We call the Barrington home and we will be here long after the bush fires and we will make sure animals in our region are attended to,” said Tim Faulkner. 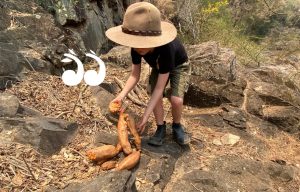 “The RFS and wildlife rehab networks are the front line heros right now and once the fires have stopped we need to rebuild and that is where conservative becomes really important to give our native animals a fighting chance to reestablish after being wiped out.

“We have 1000 animals here of the most endangered and they are the ones being affected now in the wild the most, making what we are doing even more important than ever,” Tim Faulkner said.

Tim encourages local people to put water out for the wildlife and Google the appropriate food for wildlife in your area to help them get through.

People can also phone Aussie Ark if they have wildlife which need care or the WIRES network.