TOM Hunt was elected president of the re-established NSW Farmers Scone branch last night, leading a new executive who are possibly the youngest in the state.

The new committee include two vice-presidents, Brad Smith and Danny Worth and two secretary and treasurers, Rolanda Clout and Gillian Miles.

The first order of business was reforming the Scone branch and merging with the existing Rouchel Brook branch.

The new committee also voted to send Danny Worth, vice-president to the NSW Farmers conference next week and set a date for the first Monday in September to meet again to hear about the motions from the state meeting which are relevant to farmers in the Scone district and begin work on the most important issues locally.

“I think it was fairly sad to see a few of these things fall apart so we wanted to get a bit of fresh blood and some fresh ideas out into the community and into the mainstream,” said Mr Hunt.

“I manage a beef property west of Scone and we’ve had a couple of tough years as everybody has and we need to sharpen up on a few things,” he said.

“Trying to make the most of the limited rainfall we’ve had and trying to make our grasses last a little bit longer,” he said.

“It would be great for a range of farmers to come along, share their knowledge and history to keep things going,” said Tom Hunt.

With the nationwide picture of an aging farming community and young people leaving the farm, the new Scone executive is bucking the trend and wants to encourage more young people to stay on the land as they have.

“There are a few things that can help, be it financial or leg up into the industry, but there are a lot of people who are keen to dive into it, whether it be into owning country or managing it and there are a few bits of legislation coming in to give people a hand whether it be a smaller deposits and financial help, we want to shine a bit of light on it and get some outside ideas,” said Tom Hunt.

NSW Farmers sent two board members, Chris Hunt from Merriwa and Tim Duddy from the Liverpool Plains to the meeting along with senior policy advisor for livestock Steve Bignell and Mick Collins, regional services manager to support the new executive. 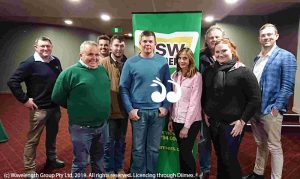 “We are seeing more groups become active during the drought, with the farming community coming together to tackle issues,” said Mr Jackson.

“One element of it is therapeutic, making sure people know they are not alone and one of the things we’ve found in this drought is it’s very isolating, so one of the beautiful things is being able to share the disasters and it’s also important for informing our politicians about where the pressure points are – to look at how we make sure rural communities don’t shut the doors,” he said.

“The brilliant thing is the NSW Farmers brand gets you through the door to talk to the politicians and policy makers and we can get our concerns in front of these people,” he said.

Local farmers and members of the broader community are invited to attend meetings and become involved with the newly formed branch.