TRAFFIC issues, rural crime and trespassing were the hot topics today at the Hunter Valley Police Community Engagement sessions at the Pickled Goose in Moonan Flat and the Linga Longa in Gundy.

“We kept it very informal and had people just come up and have a chat to us,” Inspector Guiana said.

“It’s a program that’s been implemented for some time, but its just about getting out in the community and speaking to members of the community that might not otherwise take the opportunity to get in touch with the police,” he said. 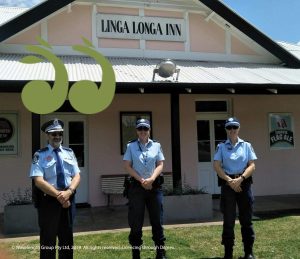 “We didn’t expect a big crowd at Moonan, but we had a few people there…then we Stoped in at the Linga Longa at Gundy and there were probably about 20 odd people there,” he said.

Inspector Guiana said the community feedback highlighted issues that police are working on.

“Probably the number one issue out there is traffic related and speeding on the way out to Moonan…going up to the Barrington Tops,” he said.

“We’ve always known about the driver behaviours out there, but it reinforces what we already knew,” he said.

“We’re looking at extra tasking for highway patrol as well as extra police out there,” he said.

“We run them throughout the year,” Inspector Guiana said.

“We’ve already done one for Muswellbrook and Scone and have plans for Merriwa, Murrurundi and Cassilis before the end of the year,” he said.