Lonhro Celebrates 21st With A Carrot

TODAY is the horses’ birthday in Australia and one of the greatest horses in Australian racing history, Lonhro, celebrated his 21st birthday at Godolphin.

Lonhro was paraded in front an adoring crowd and momentarily drew more attention than the Lexus Melbourne Cup 2019, which was also on display.

After his star appearance, he went back to his stable and celebrated with a carrot.

The achievements of Lonhro are long and well known, but the impact Lonhro has had as a living legend includes people naming their babies after him, people who have tattoos of him and people have even proposed marriage in front of him.

Barley Ward-Thomas, stud manager of Godolphin at Kelvinside, gave some insights into the personality of the great horse.

“He is a very strong personality, he is a no nonsense horse, very straight forward; I think if you are going to be an elite athlete and you’re going to lead the sort of life he has had,” said Mr Ward-Thomas.

“He is calm very intelligent and easy to work with, but he is certainly not soft,” he said.

“He’s a horse that if he was a human being he would command a great amount of respect, if he was a person he’d be a leader you’d willingly follow, with great charisma,” he said.

“Some horses learn quickly, some horses adapt quickly and some horses take the pressure that we put on them well, he’s a horse that does all of those things really well,” he said. 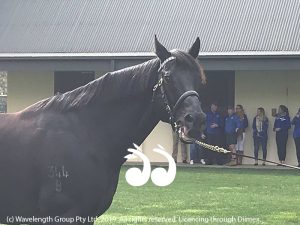 Lonhro stopping to acknowledge the crowd. 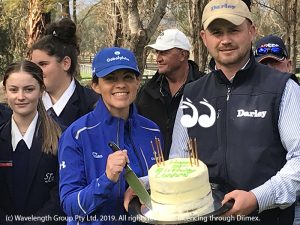 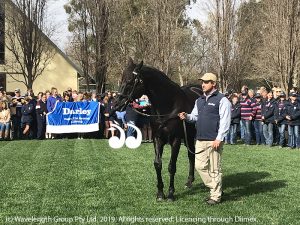 Lonhro on parade at Godolphin. 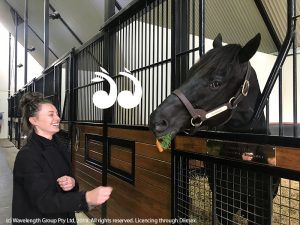 Lonhro celebrating his 21st birthday with a carrot at Godolphin. Taylah Fellows was pleased to have her fingers in tact.

« Why We Celebrate The Horses’ Birthday Today
Letts: Racing Legend in Town with the Cup »