Filed in Just In by Elizabeth Flaherty December 2, 2019

MORE than 70 residents attended an RFS information session on the Meads Creek West fire, which has burnt through 6,700 hectares, since it was sparked by lightning on Wednesday.

Currently the fire is not running, with cool conditions and some rain giving fire fighters the chance to work on containment lines.

David Nicholson, public liaison officer for the Volunteer Rescue Association, with more than 20 years firefighting experience said while there is no immediate threat to homes, winds in the next three days could change the conditions. 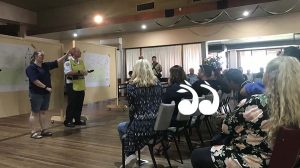 David Nicholson and Peta Luke providing an update on the Meads Creek fire.

The head of the fire is on the eastern side of the front, which is the main area of concern for firefighters.

While some rain has given some relief it has also hampered trucks and equipment from forming firebreaks and delayed planned back burning operations.

There are currently seven fire trucks, four helicopters and National Parks fighting the fire, with two strike teams arriving tomorrow, one crew with four trucks from Dubbo and another crew of four trucks from the northern fires.

A containment line from Wollar Road to Flaggs Road, running east to west is almost complete and will provide protection should winds move the fire north towards the township of Merriwa.

Residents are encouraged to have a fire plan in place and may not be able to rely on the internet and phone to access information during a fire when power and phone lines may be cut. 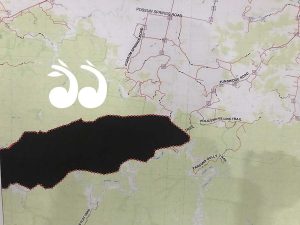 The head of the fire is at the north east, but not currently running and containment lines are being established.

Cullingral Road was identified as problematic during a fire and residents urged to have a plan to leave before the road is cut, if the fire progresses.

Information will be updated daily by the RFS for the local community on their website and newsletters with updated maps issued to the Merriwa RSL, Bylong Shop and Sandy Hollow service station.

The Local Land Services are set up at the Showground and residents are welcome to bring pets, horses and livestock. Residents must register with the LLS, so that animals are readily identified.

Local police have urged firearms owners to consider if they can safely store their firearms with friends, as storing firearms in a car after evacuation is not permitted under the law.

Local ambulance have encouraged residents to phone them if they have any respiratory issues, saying “a lot of people are too stoic for their own good, please call us, we’d rather treat you while symptoms are mild than before they become more severe.”

People who have been impacted by the fire should register with community services, based out of the Merriwa RSL Club.