Filed in Just In by Elizabeth Flaherty February 12, 2020

YESTERDAY, Council’s development and environment committee moved a motion to recommend approval of another petrol station in Merriwa at this month’s Council meeting, a proposal Councillor Sue Abbott described as predatory for other small businesses, which are struggling.

A section of the land on Bettington Street, proposed for a highway service station in Merriwa.

Nine objections to the service station were received by Council from nearby residents and property owners raising concerns including, soil contamination, impact on property prices, potential damage to buildings from heavy vehicle movements, pollution and lighting.

Cr Abbott raised concerns the service station would disadvantage local small businesses benefiting from passing trade, would impact on the heritage conservation area and was not in the public interest.

“I don’t think we should approve this proposal, there are a lot of issues here that haven’t really been addressed…we can’t condition away all of the negative and potentially negative impacts,” said Cr Abbott.

“…what is already in Merriwa including several cafes, a pharmacy, an existing petrol station, given that parking is not an issue in Merriwa and that already the local RSL provides showers and rest stops to the truck drivers, there are small boutiques, there is a news agency and there’s an IGA, it’s almost like this is a predatory business and that it’s offering all of these things that would definitely take away from the rest of Merriwa,” she said. 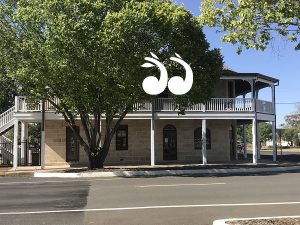 The Fitzroy Hotel on the corner of Bettington and Dutton Street, Merriwa, may soon be neighbouring a large petrol station.

Further, Cr Abbott highlighted the advice from the heritage advisor that the impact of the service station would be detrimental to the heritage conservation area and on those grounds should be refused.

Cr Campbell, who lives at Merriwa said although he had read the submissions against the proposal, he supported the development.

“I will be supporting it, because I believe that Merriwa, only having one service station places us at a disadvantage, every other town has two service stations and I’ll also note at Dunedoo there is a large Shell service station, not unlike what this one is being proposed,” said Cr Campbell.

Cr Fisher, said he had serious concerns about the proliferation of disused petrol stations throughout the Shire, describing them as rotting eyesores and raised concerns at the pattern of approving developments, which don’t progress.

“In broad terms the disused station next door raises an issue, this is I think the third new fueling station that I’ve approved or been involved with while on Council and neither of the other two have been built,” said Cr Fisher.

“The one in Aberdeen opposite the commercial was approved in the last Council…then there is the one in Murrurundi the roadhouse at the top of town, which is still sitting vacant and empty,” he said.

“So these things have a habit in my experience of being approved and then just sitting there and nothing ever happens, which is a concern.

“Of equal concern or perhaps more concern is the proliferation of former fuelling stations dotted around the Shire, such as the one next door to this,” he said.

“We know that these things have a tendency to leak and contaminate and nasty petrochemicals leach into the sub-soil and water systems etc etc so I would like to propose we have an audit for all fuelling stations across the Shire, because I believe it is our responsibility is it not?” questioned Cr Kiwa Fisher.

Cr Fisher was advised an audit of service station sites would be undertaken.

Mayor Wayne Bedggood, took aim at the developers of petrol stations, but believed there was little which could be done to stop such developments.

“My comment would be that we keep assessing these types of developments and I understand that the committee and Council have to work within those guidelines, rules and regulations that we are given and that on paper, this particular project ticks most of those boxes if they adhere to the consent conditions,” said Mayor Bedggood.

“The fact of the matter is, that it is not in everyone’s best interest, it is not in the right place and it’s probably not even necessary, but unfortunately the rules and regulations don’t accommodate for any of that,” he said.

“…part of the issue, the people who are putting in these developments are doing it, aren’t the people that are building the actual operation; now they are purely developers who are getting the application up and then on-selling it and that is part of the issue as well and there’s no onus of responsibility there either, it’s purely a money making exercise; I should say that’s a generalism, but you only have to look about to see that it is fairly often the case,” Mayor Wayne Bedggood said.

The motion was passed for the recommendation for approval of the service station be made at the next general Council meeting this month.