YESTERDAY the as pubs and clubs were considering if they could open for ten people to dine in, they were advised they would not able allowed to reopen for dine in if their restaurants and cafes were within the walls of a pub or club, but later that afternoon the government back flipped and said they would allow them to reopen for ten customers.

There is still confusion within the hospitality industry as they consider what regulations are in place, how they can protect customers and evaluate if it is worth the costs of reopening.

Romy Kelaher from the Belmore Hotel said they would weighing up their options over the weekend. 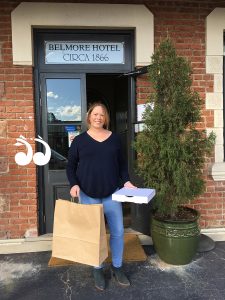 Romy Kelaher, ready to make a delivery from the Belmore and weighing up options for customers to dine in.

“As for what we do, we’re still working on it over the weekend and the next week and we’re probably looking to offer it to people somehow,” said Ms Kelaher.

“We are trying to gain clarification if it is ten people in total or if we can also have ten outside and we are getting different answers,” she said.

“The whole thing is very much about adapting every day or every week, to come up with new ideas and new options.

“It would be nice to offer a proper service to people, even if it is only ten people and we might not do that every night, but look at weekends,” Romy Kelaher said.

Nick Sakno, owner of the Royal Hotel in Scone said he wished there were separate regulations for regional areas, where the population is smaller and the infection rates much lower.

“The government doesn’t really care about the regionals, it’s focused on the cities,” said Mr Sakno.

“We have five rooms and we are still limited to ten people in all of those rooms, I could understand 10 people per room, but it’s for the whole establishment,” he said.

“Then there is the variation of a family of five that live in the same house, but they are still counted as five of the ten you are allowed, all of the restrictions haven’t been thought out properly,” he said.

Nick said he is still considering what could work and was also keen to gauge if people would return for meals if they did reopen.

The Doncaster Bistro at the Scone RSL will not be opening for dine in at this stage, but will continue to offer their take away service.

The Thoroughbred Hotel are also continuing to offer takeaways and are assessing if they can offer a dine in option.