THIS weekend the third annual women’s 7’s rugby union tournament will be held, with teams from throughout the state and the ACT headed to Scone.

The tournament was the first all women’s rugby 7’s in Australia and it’s popularity with players and spectators is growing.

Bridget Hunt, coordinator and secretary of the Scone Rubgy Union Football Club, said they are excited the tournament is attracting a loyal following and encourage young players to come down and be inspired.

“There are eight teams playing this year, with teams travelling from Sydney, Nelson’s Bay, Newcastle, the Central Coast and the ACT,” said Ms Hunt.

“it is great to see the teams are coming back for this tournament, the Hamilton Hawks will be playing for the first time this year,

“Southern Districts from Sydney will be defending the title and the Vikings from the ACT have won before and would like to take it back again too,” she said.

“Yasmin Meakes, who plays for the Aussie’s 7’s side will be here on Sunday, so it’s a great opportunity for young players to come and meet her and be inspired,” she said.

“And one of the girls who plays for Hornsby is collecting old rugby boots and balls which they are sending to Madagascar, so we’ll have a basket at the bar,” she said.

“The games begin on Saturday at 10am until 3pm, then at 6pm we are all headed to the Belmore Hotel for a BBQ, we’ll have some boat races for the teams at 7:30, followed by music and a foam party,” she said.

“Entry is free and we encourage everyone to come down, support the local team and enjoy the great atmosphere of the tournament,” Bridget Hunt said. 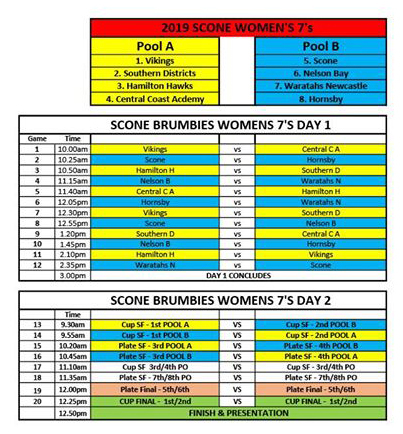 The draw for this weekend’s tournament.

« Preparing for Christmas in the Park
What’s On »