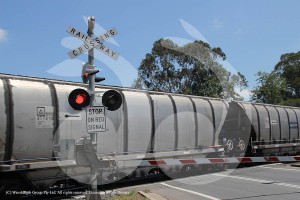 THE township of Scone is cut in half by a railway line and currently there is no way to circumvent the rail crossings at Liverpool Street and Kelly Street, leaving residents and emergency services waiting for trains to pass.

There are plans with the Roads and Maritime Service (RMS) to build a bypass around the township and a rail overpass at the Kelly Street rail crossing, which will not be operational until 2019.

In the meantime, the issue worsens as coal trains grow in length and frequency, causing longer traffic delays.

The Kelly Street rail crossing is the only remaining level crossing on the New England Highway.

Two emergency access gates were established, one at Kingdon Street and the other at Muffet Street, by the Australian Rail Track Corporation (ARTC) in 2013.

The emergency access gates are only for emergency service vehicles, the keys are held by local police and only used when there is a train breakdown which blocks the Liverpool and Kelly Street crossings.

The distance between the Kindgon Street and Muffett Street emergency crossings is approximately 1556 metres, with the longest coal trains currently only 1330 metres.

Due to signalling protocols, coal trains had regularly been at a stand-still across one of the level crossings.

The ARTC has since changed the signalling so that the train controllers will not send a coal train through Scone, unless they can activate two green signals in a row, allowing the train to completely pass through each level crossing without stopping.

There is an average of 38 rail movements through Scone every 24 hours, including:

On average, each coal train movement closes the crossings for three minutes, so the crossings are closed for a total of 90 minutes during a 24 hour period.

The opening of more coal mines in the Gunnedah Basin will continue to compound the situation.

Each year the ARTC works with the coal industry to develop a coal chain capacity strategy for the rail system: click to read the 2015-2024 Hunter Valley Corridor Capacity Strategy, July 2015. 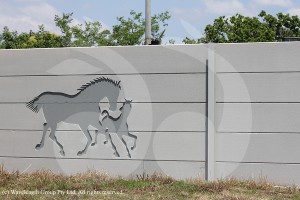 The noise wall near the Kelly Street rail crossing in Scone.

Most coal trains passing through Scone have wagons weighing 120 tonnes.

This reduction and acceleration in speed causes what is known as bunching and stretching noise, where the carriages either bang together or stretch apart.

In January 2014 the ARTC commenced work to reconfigure the railway line near the station, laying heavier lines and erecting noise walls along the rail line.

Some reports detailing previous issues with the crossings: