Just In > Supporting Science and Students

Filed in Just In by Elizabeth Flaherty November 29, 2019

TODAY people around the world are supporting student strikes to bring awareness to climate change and in Scone Murray Armstrong was doing his bit to support the students, with a sit in at the Upper Hunter Shire Council.

Murray was joined by Dr Richard Abbott and Roslyn Armstrong, with others welcome.

Murray said he only decided to support the students with a sit in, a couple of days ago and thought the Council would be the ideal place, since it is one of only a handful of Councils which has declared a climate emergency at their February meeting. 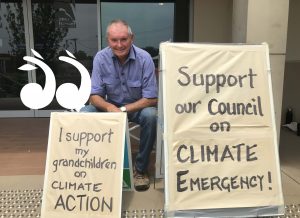 “I have been supporting the school for climate action rallies since the first one in Martin Place, Sydney in November of last year and I’ve been to two major rallies in Newcastle since then and I’ve decided it is time that I made a stand in my local community,” he said.

“So why being advised for 40 years by climate scientists that we are approaching a very serious situation for the human population, why are we not doing enough about it? 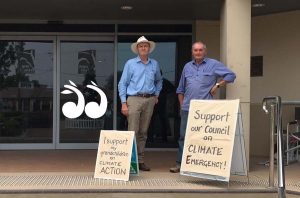 There be might be 2 percent of climate scientists who have a different opinion, but 98 percent agree, and I think it is fear that makes people want to believe the 2 percent.

“What the scientists are predicting is a frightening future and it is much easier to deny it is happening, but we do need to look at the science and act,” he said.

“The global temperature has risen by 1 degree since 1900, but the scientists say that if we reach 2 or 3 degrees it will have significant impact and what they were predicting 40 years are now occurring with more unexpected climactic events,” said Murray Armstrong.

The first step the school children are lobbying for, is no new coal mines and a transition to more renewable energies, which Murray believes is a step in the right direction.

“Germany is increasingly relying on solar energy and Australia has more sun than most countries,” Murray Armstrong said.

For more information on the science of climate change visit: Skeptical Science.

« Airport Motion: Hear The Meeting For Yourself
New Age for the Golden Fleece »