Filed in Just In by Elizabeth Flaherty October 3, 2019

A six month old Parma wallaby joey is lucky to be alive after being rejected by its mum.

Fortunately, the wallaby was found and now calls the Aussie Ark home, where it will be part of a program to keep the threatened species alive.

Now it just needs a name, so the Aussie Ark are asking for ideas from the community, with the person who puts forward the winning name being given a tour of the Aussie Ark for two people valued at $300 and will meet the joey. 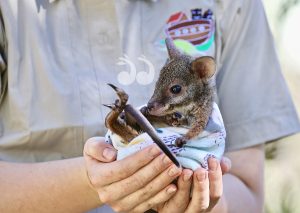 What would you call this Parma wallaby joey?

Liz Gabriel, curator at the Aussie Ark, said the Parma wallaby population is in decline due to feral pests and destruction of habitat, but this as yet unnamed joey has the chance for a great life.

“We would love for the community to help us name her and give her a great start in life,” said Ms Gabriel.

“Unfortunately the population of Parma wallabies is declining, once found almost down to the Victorian border, their habitat now finishes at Gosford on the Central Coast,”she said.

“This little joey is so lucky she was found and she will become an important part of our insurance population in one of our wild sanctuaries at Aussie Ark,” she said.

To submit your name suggestion go to aussieark.org.au/nameourparma

« Bill and Sarah Welcome All To Geraldton
Trout Season Opens – Come On Up! »