Filed in Just In by Elizabeth Flaherty October 4, 2019

THE Upper Hunter Shire Council claimed vacant residential blocks in Phillip Street were unsalable, however, one of the four blocks has sold to a young couple who plan to build a home.

The Council told NSW Planning the blocks were unusable and undesirable for residential, in complete contradiction to Council’s own Local Environment Plan, which was passed into law in 2013. 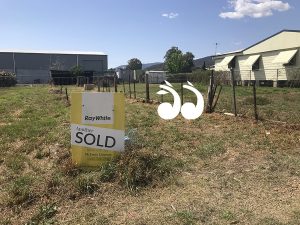 A residential block which Council claimed was unsalable has sold.

Council’s claims were made in support of a land owner who wanted to rezone three of the residential blocks initially to light industrial, but has recently changed tack and wants them rezoned as mixed business use.

The former owners of the blocks, now recommended for rezoning, were surprised at Council’s claims they were not suitable for housing, as they had purchased the blocks to build homes. Read: Previous Phillip Street Owners Glad to be Gone.

“Close to the main street, there is just no vacant residential land available,” said Mr Gleeson.

“There are probably only three or four vacant residential blocks in town at that entry level price of $100,000 or below and none of those are close to the main street,” he said.

“The blocks in Phillip Street are ideal for people entering the housing market and the only ones within walking distance from the main street,” he said.

“The fact that you can walk to town from that spot and you could have three or four houses built along there is going to look pretty schmick, (considering rezoning) it’s just wrong and it’s not necessary,” Pat Gleeson said.

Initially the proposal was to rezone the residential blocks to industrial, however the rezoning proposal has just changed to mixed business, which residents have said does not address the same problems with rezoning. Read: Goal Posts Moved on Phillip Street Rezoning.