Filed in Just In by Elizabeth Flaherty December 19, 2019

JACK Flaherty passed away yesterday afternoon at Strathearn Aged Care in Scone, at 98 years of age.

He met his wife Hilda Adel Gordon while attending primary school at Segenhoe and would recount fondly the moment she strode into the classroom to enrol in class.

Jack served in WWII in Singapore and was lucky to escape becoming a prisoner of war when the Japanese invaded the peninsula on his 21st birthday.

Jack and Hilda Flaherty with their sons (L-R): Chris, Kerry Flaherty and Peter.

When he returned from the war Jack married Hilda on April 28, 1945, they began raising a family of three sons, Kerry, Peter and Chris and ran a dairy at Jersey Park alongside his brother Purvis “Roy”, his wife Judy and children Louise “Suzie”, Sam and Joy.

Jersey Park became the source of many family stories and was base for a large extended family and many friends who Jack and Hilda loved to entertain with the style of country spread that their generation did so well and at which Hilda excelled.

After retiring from the dairy, Jack and Hilda sold their part of Jersey Park, moved to Scone and ran a transport business with sons Kerry and Peter.

Hilda passed away when Jack was 90 and he moved into the Strathearn Village, but for many years still managed to get about on his red scooter visiting people, having lunch and popping into the pub.

He died comfortably, with care from family and the fabulous staff at Strathearn who had adapted to the 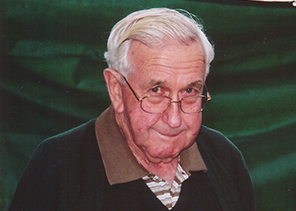 dairy farmer hours Jack always kept and could rely on him for a funny anecdote throughout their day.

His grounded charm, dry humour and love will be missed.

Jack’s funeral will be held on Monday: