THE Upper Hunter is receiving attention and praise for its successful visible wellbeing program.

The program was introduced in February 2018 by the Where There’s A Will Foundation (WTAW) in collaboration with Lea Waters, Professor of Positive Psychology.

The visible wellbeing program has been launched in every primary and high school in the Upper Hunter and has focused on training teachers, parents and children particular practices and skills that help support and build up mental health.

Professor Lea Waters said she is inspired by the Upper Hunter’s commitment to the program and has already received an abundance of positive feedback from the teachers involved.

“What the teachers are also telling us is that they’re seeing a spillover in kids creating more positive and supportive relationships amongst other children and the teachers themselves and incidents of bullying have decreased during the last eighteen months,” she said.

“Students are showing higher levels of emotional literacy, they’re able to identify the emotions they’re feeling and the purpose of those emotions, whether they’re helpful or unhelpful emotions and they are also showing much higher signs of help-seeking which is great because kids are now going to talk to their teachers or cousellors, psychologists and chaplains,” she said.

The program has been so successful in Upper Hunter schools that outside educators have expressed interest in applying for jobs at visible wellbeing schools.

“Teacher satisfaction has gone up and more teachers from outside of the region are applying to work for Upper Hunter schools because they know its a visible well-being school and they want to learn about it,” said Prof Waters.

“A lot of schools, local communities and psychologists across Australia are contacting me and saying ‘can you tell us more about WTAW we want to replicate this in our region’, so I pass them on and say ‘yeah good you should learn from these guys they’re an amazing team and they’re doing an amazing job,'” she said.

“I would love to see this go Australia wide…what is really inspiring about what WTAW have been doing in the Upper Hunter is that it’s the first whole region to do this proactively and systematically…WTAW has offered a template for other regions and other communities to be able to adopt and see ‘this is possible,'” said Prof Waters.

On Tuesday, August 13, Professor Waters launched her Strength-Based Parenting program in Scone, the third aspect of the visible well-being program, provided as an online format for parents to access at home with their children.

Jane Callinan, Chair of WTAW was amazed by the amount of supporting parents and families who attended the information session and launch, complimenting the number of males who turned up.

“I’m really pleased that so many people came out, its always a big effort in the middle of winter on a Monday night, and the comment from Lea Waters about how this was the biggest turn out of men at an event, we really applaud that,” said Ms Callinan

“Really the message of the night was that visible wellbeing doesn’t stop at the school gate, we’ve spent two years with the schools and now it’s reinforcing that in the home, and we can continue to build on that,” she said.

“Lea has given us the online program for free for the next twelve months but WTAW will be looking to fund the program after that because the community is raising money for WTAW to pay for this sort of training, so come and do the training!” she said.

It was a packed room at the Where There’s A Will parent information session. 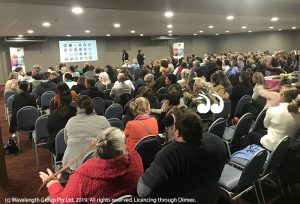 Professor Lea Waters asked the audience to discuss the character strengths of their children. 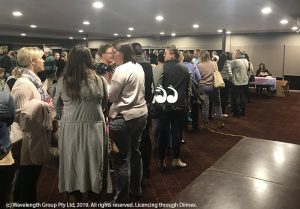 There was a long line for copies of Dr Lea Waters’ book, “The Strength Switch”.

Tags: charity, Education, Parenting, Where Theres A Will