Filed in Just In by Elizabeth Flaherty December 16, 2019

TONIGHT Council voted to apply to Heritage New South Wales for the 1919 section of the Wilson Memorial Hospital in Murrurundi to be included on the NSW State Register.

Councillors Abbott, Bedggood, Brown and Driscoll voted in favour of the application, Councillors Burns, Campbell and Collison voted against and Councillors Fisher and Watts were absent. 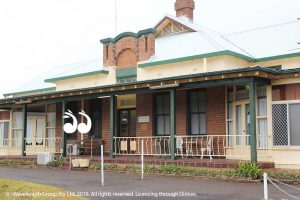 The hospital was named after Mr William Arlington Wilson who lived at Rosedale Cottage in Murrurundi and donated the land for the hospital.

Residents Ray Hynes and Bev Atkinson spoke in favour of the motion during public participation highlighting the importance of retaining the 1919 section of the building, while supporting the development of a new hospital.

Mr Hynes explained that retaining the 1919 section of the building could co-exist with the new hospital development and the community wanted to explore potential uses for the original building, including using it as a physiotherapy and rehabilitation centre.

While there is asbestos identified in the 1959 maternity section and additions to the original hospital, Mr Hynes explained asbestos was not used in 1919 and the presence of asbestos in that part of the building was limited.

Mr Hynes said while keeping the foundation stone and some bricks from the old hospital was a nice idea, it did not preserve the history of the hospital.

The Mayor asked Mr Hynes if he felt there had been adequate consultation with the residents of Murrurundi on the redevelopment and Mr Hynes said it was never made clear to residents that supporting a new hospital would mean complete demolition of all existing buildings.

Cr Burns said the heritage assessment in the Review of Environmental Factors found the hospital had been altered and modified to such an extent that little of it remains, however Cr Abbott noted that the REF assessed the entire building, whereas the motion was specifically for the 1919 section of the building.

Mayor Bedggood said he was surprised that the original building seemed to be in fairly good condition, but conceded he was not an expert.