Recent News > Prevented from Going to the Pound

Prevented from Going to the Pound

UPPER Hunter Shire Council ranger, Jason Marks appeared in Muswellbrook court yesterday to apply for a personal violence order against Leah Marchant who was a volunteer at the Scone Pound and now operates the animal rescue group Scone Lost Dogs.

If granted by the court, Ms Marchant would be legally prevented from attending Scone pound to rescue animals. 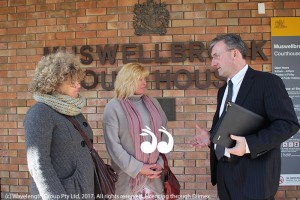 John Preston, local candidate for the Shooters, Fishers and Farmers party represented Ms Marchant in court arguing there was no basis for the personal violence order and the matter should be resolved in mediation.

Magistrate Chicken noted that while Ms Marchant may not have physically threatened Mr Marks it was possible to harass someone via social media.

Whilst Ms Marchant opposes the application for the personal violence order, she agreed to abide by the terms of the order until the matter was resolved in mediation or was heard in court.

In Mr Marks’ application for a personal violence order he claimed:

“On 22/05/17, on Facebook, Boarding Kennel – Cattery and Pound Reform Australia quoted an interview with the defendant where she stated that “Ranger Marks broke procedures at the animal shelter which resulted in the deaths of three dogs”. The defendant also claimed that documentation had been destroyed. This story was also published at Scone.com.au on 10/10/16. The PINOP (person in need of protection) states that this information was inaccurate and would tend to lower his reputation in the eyes of a reasonable person.”

Further it is stated:

“From 25/01/15 the defendant has made various imputations about the PINOP on Facebook in regards to the PINOP’s professional role. These comments include: “He’s got it owing the way he has treated women and dogs”. “Mr Marks got away with killing 2 dogs thru lack of care”. “would you want your dog in his care” and “he is physically overbearing”. The defendant has insinuated that the PINOP is dishonest and unfair, that he mistreats animals in his care, he works outside the scope of his employment and he keeps animals in faeces and urine. This is impacting the PINOP’s career, personal life and mental well-being.”

Ms Marchant maintains she is not a physical threat to Mr Marks, has not harassed him and there is no basis for a personal violence order.

In her affidavit she stated, “I last saw the applicant in person on or about 10:30am on the 21st of June. We did not speak to each other. He approached me and appeared to laugh. I did not speak to him nor respond.”

John Preston said he offered to represent Ms Marchant in the matter because he wanted to support the work of Ms Marchant with Scone Lost Dogs.

“I hope it is a misunderstanding that we can resolve between the parties and it is very important that community volunteers get assisted with matters such as this,” said Mr Preston.

“I think the people who volunteer for all of these activities whether they be dog rescue or meals on wheels are heroes and we need to do more to recognise them; they are they really are heroes in our community,” he said.

“I think the dogs of this community should feel very safe with the people they have looking after them,” he said.

“If I come back in my next life as a dog I hope I get lost in Scone,” John Preston laughed.

Councillor Sue Abbott was at the courthouse to hear the matter and is also concerned the personal violence order may prevent Ms Marchant from rescuing local animals from Scone pound.

“I have a lot of respect for Leah and I think she does a really good job, I mean some of the things Leah must see with dogs and cats and what people do to them would break your heart and I‘m a coward in that regard, so we need Leah,” said Cr Abbott.

“Leah has done a lot of work with the pound in the past and a lot of initiatives have been Leah’s suggestions and I believe that insulation has happened,” she said.

“Leah has a lot of experience and other places are using Leah, she’s widely known across Australia for her work with dogs and I think there is a lot of expertise that we can tap into and our dogs would be the better for it,” she said.

“That’s the aim of the game, we have these animals that we like to share our lives with and sometimes it doesn’t work out so we need other people to go in there and rescue them and rehome them appropriately,” Sue Abbott said.

scone.com.au requested an interview with the Mayor Wayne Bedggood or the general manager of Upper Hunter Shire Council Waid Crockett, but neither responded.